Finding a woman sobbing because she had locked her keys in her car, a passing soldier assures her that he can help.

She looks on amazed as he removes his trousers, rolls them into a tight ball and rubs them against the car door.

“Easy” replies the man. “These are my khakis”.

The new pope gets up on the morning after the election and goes to the kitchen thinking about making himself some toast, spread with dulce de leche washed down with a bowl of mate.

Before he gets there a Cardinal interrupts his passage and insists that from now on he must order his breakfast from the kitchen and that his cooking days are over.

‘We have two fine English cooks, Sister Margaret and Sister Christina, at your service Your Holiness’.

Francesco is a little miffed, not only because he can’t cook his own breakfast but that his cooks are English (memories of the Malvinas are hard, even for a humble man, peace-loving, man to suppress).

So he continues to the kitchen to meet the good sisters and makes a good impression.

‘What will we have this morning, Sisters?’, he asks tentatively.

‘It’s a special day, Your Holiness, so we are preparing a full English Breakfast!’

‘Forgive me sisters but it brings to mind a song’. 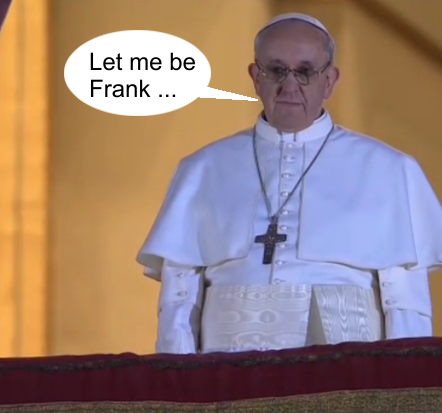