This video seems to accurately show how many arguments go … only it’s funnier:

A bit harsh, but funny: 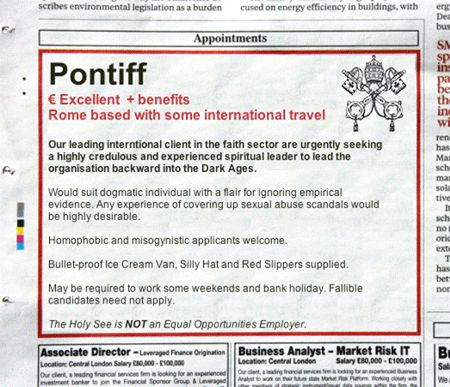 There is much clamoring and speculation and conspiracy theory activity surrounding the resignation of Pope Benedict, but variations on the theme of ‘Ex-Benedict’ do need to be kept for the record. 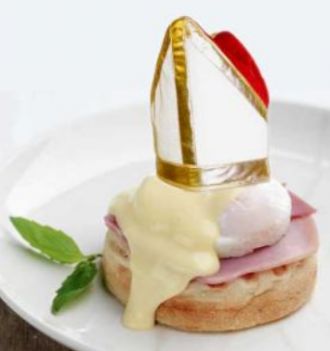 Eggcellent! Cracked me up! The idea is not original, I poached it. The image took no time to hatch! Etc, etc …

OK, it’s weird. I know. I just love watching the Americans do their own peculiar form of democracy. But this is Wryday and our ABC has come to the party:

See more in US election memes: the best and funniest of the internet. As a bonus it might help you understand what a bleeping meme is.

No need for translations:

Well, taking up last weeks theme wasn’t planned this week, but serendipity stepped in. This clip is also eerily relevant to today — well up until a few days ago at least — and features the very young Andrew Denton and Libbi Gorr (AKA Elle McFeast):

The older we get the more important it is to incorporate exercise into our daily routine. This is necessary to maintain cardiovascular health and maintain muscle mass.

If you’re over 50, you might want to take it easy at first, then do more repetitions as you become more proficient and build stamina.

Warning: It may be too strenuous for some.

Always consult your doctor before starting any exercise program!

Now scroll up …
And that will be enough for the first day. Great job!
Have a glass of Wine.

A meme is “an idea, behavior or style that spreads from person to person within a culture.”[2] A meme acts as a unit for carrying cultural ideas, symbols or practices, which can be transmitted from one mind to another through writing, speech, gestures, rituals or other imitable phenomena. Supporters of the concept regard memes as cultural analogues to genes in that they self-replicate, mutate and respond to selective pressures. (WIKI)

An Internet meme is an idea that is propagated through the World Wide Web. The idea may take the form of a hyperlink, video, picture, website, hashtag, or just a word or phrase, such as intentionally misspelling the word “more” as “moar” or “the” as “teh”. The meme may spread from person to person via social networks, blogs, direct email, news sources, or other web-based services. An Internet meme may stay the same or may evolve over time, by chance or through commentary, imitations, parody, or by incorporating news accounts about itself. Internet memes can evolve and spread extremely rapidly, sometimes reaching world-wide popularity within a few days. (WIKI)